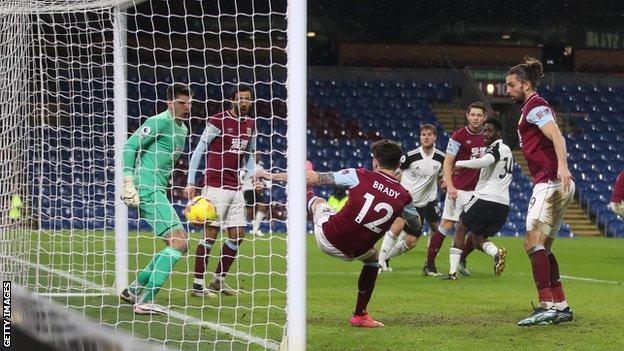 Relegation-threatened Fulham lost some of the momentum built up by their win at Everton but showed battling qualities to claim a point at Burnley.

But they failed to repeat that bright and incisive display at Turf Moor against a typically hard-working and competitive Clarets side, who married their industry with the game’s main moments of attacking ingenuity.

It was the visitors, though, who took the lead, as much through fortune as design, with Ola Aina’s chested effort from a corner finding the net despite an attempted clearance from Robbie Brady on the line.

Crucially, the visitors were denied the time to draw confidence from the opener, with Burnley hitting back three minutes later through a well-taken Ashley Barnes finish, following a superb low ball from Jay Rodriguez.

The same two strikers had both narrowly failed to get a goal-bound touch on a superb low cross from James Tarkowski in the first half, while Rodriguez saw a low drive kicked away by Alphonse Areola shortly after his side had leveled the score.

The draw represents an opportunity missed for Burnley to put further ground between themselves and the London side, with the gap between the two a sizeable but not yet entirely comfortable eight points.

Scott Parker’s side remain six points shy of safety, with Newcastle the 17th-placed side most in danger of being reeled in.

A point gained, or two lost for Fulham?

Earning a result at Burnley against a side built to expose the mental and physical weaknesses in an opponent, especially a newly promoted one, is not an easy task.

In doing so, Fulham have further demonstrated their growth into a top-flight side, after considering a number of creditable draws earlier in the campaign and then dispatching an aspiring big-hitter in Everton last weekend.

Unfortunately, the Cottagers’ development could have come too late.

Only wins will really eat into the gap between themselves and safety and they cannot afford to let a slip from their grasp when it is there to be had.

It is why Parker and his side will be so disappointed at the speed and manner with which they conceded the equalizer at Turf Moor, throwing away the lead and momentum they had seized by allowing Barnes a free run in on goal to finish.

They had been on the back foot for large periods before that and were indebted to a bit of fortune for their goal, but aesthetics come a distant second to actual points right now.

The biggest positive for Burnley will be that their advantage over the Cottagers remains the same as it was before kick-off.

With the likes of Newcastle and Palace in far worse form than they are, and Brighton a point worse off, they will feel relatively calm about their situation.

What will worry manager Dyche is further injuries to his already depleted squad, with Johan Berg Gudmundsson having to depart, and his replacement Robbie Brady also needing to be replaced.

There is no respite for either side, with both facing further important fixtures at the weekend.

Burnley host West Brom, the side a place below Fulham in the table, while Parker’s men welcome bottom club Sheffield United to Craven Cottage.