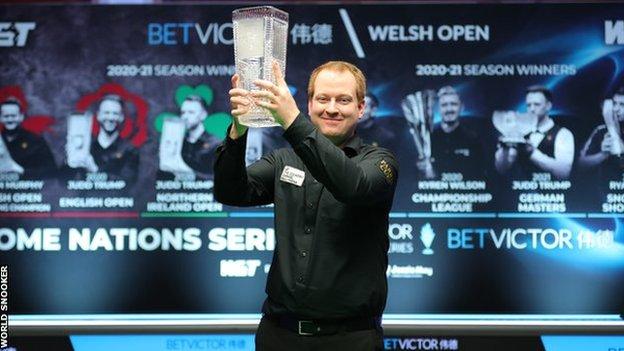 Jordan Brown has won the 2021 Welsh Open after beating Ronnie O’Sullivan in a final-frame decider in Newport.

The final at Celtic Manor was a tight affair, but it was Northern Ireland’s Brown, 33, who pulled off a shock 9-8 victory to deny O’Sullivan, 45.

Brown built on afternoon lead of 5-3 to lift the Ray Reardon trophy and claim the winner’s cheque for £ 70,000.

“I knew if I got over-awed about Ronnie I wouldn’t win so I focused on my own game,” said Brown.

“It was a privilege to just play Ronnie in a final.

“I always believed in myself, I’ve had some dark days but those make you stronger as a player and a person.

“Five years ago I told myself to give snooker a proper go and it is paying off now.”

He is also the lowest-ranked player to win a ranking title since Dave Harold won the 1993 Asia Open.

It has been a story of hard work and determination for the world number 81 who was only one match away from dropping off the tour a few months back and was working in a petrol station three years ago.

He continued his remarkable form in the tournament by taking a 4-1 lead in the afternoon session at Celtic Manor.

Brown, nicknamed the ‘Antrim Ferrari’, came racing out of the blocks in his first ranking event final to win the first two frames.

He looked relaxed and determined after taking an opening frame in which both players made errors.

O’Sullivan, made a 74 break in the third frame to make it 2-1 but Brown responded with a 78 break to lead 3-1 at the mid-session interval.

Brown won the fifth frame with a 107 break, but some sublime snooker by O’Sullivan followed as he reeled off breaks of 135 and 121 to win the sixth and seventh frames to reduce the deficit to 4-3.

The Northern Irishman, however, claimed frame number eight to lead 5-3 at the end of the afternoon session.

O’Sullivan came out in the evening session looking focused and took the ninth frame to reduce the deficit.

He soon leveled the match at 5-5 after making a 68 break, then went in front, taking the next frame with a break of 61 after Brown had missed a red to the center left pocket.

Frame 12 was a tense battle but Brown held his nerve to level back at 6-6 before the mid-session interval.

A calm Brown took advantage of a frustrated O’Sullivan to take the 13th frame, but the experienced Englishman responded with a classy 57 break – including nine blues and one yellow – to level the match at 7-7.

O’Sullivan missed the pink with 25 points on the board to hand Brown the chance to steal the next frame, which he did with a 56 break.

However, the world champion fought back with a 116 break to make it 8-8 and force a final frame decider.

Brown kept his cool in the deciding frame, despite an early fluke from O’Sullivan, to be crowned Welsh Open champion.

“I’ve enjoyed every minute of it,” said O’Sullivan.

“Jordan is a great guy and I’m so happy for him to win.”

“I fluked the red in the final frame and I could see the disappointment in his eyes and that would have been a horrible way to win.

“I played all right and not many people beat me when I play all right – but I couldn’t be happier for him.”