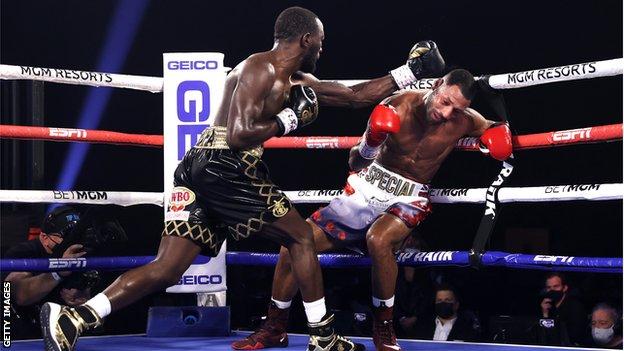 Kell Brook’s career is “all over at the elite level” after his defeat by Terence Crawford, says BBC Radio 5 Live boxing commentator Mike Costello.

“At the elite level, it’s all over for Brook,” said Costello.

“It was quite uncomfortable watching a former world champion pawing away at his eyes and cheekbones.

“That was the worrying thing for me – he clearly has a problem with those injuries.”

Brook won his first 36 bouts, including an impressive points victory over American Shawn Porter to claim the IBF welterweight title in California in 2014.

But he broke his right eye socket in defeat by middleweight Golovkin in 2016 before suffering the same injury to his left eye socket in losing his IBF belt to Spence Jr in 2017, requiring surgery both times.

Against three-weight world champion Crawford, Brook had to take a standing eight count in the fourth before the referee stopped the fight as the unbeaten American, 33, landed a flurry of shots.

“After the Spence fight, I said I’d be happy if I never saw Kell Brook in the ring again,” Costello said on the 5 Live Boxing podcast.

“I’ll say the same again and even more so now.

“He was competitive for two and a half rounds and, according to two judges, he was leading going into the fourth, but it’s how quickly it finished – that’s what worries me.”

Costello said it is “time for Brook to walk away with his legacy intact” and that his victory over Porter will be remembered as “one of the all-time great wins” by a British boxer abroad.

He added he has “no interest” in Brook finally facing long-term rival Amir Khan in a fight both sides have never managed to agree a deal on.

But his co-host, BBC Radio 5 Live boxing analyst Steve Bunce, said that all-British bout could happen, with Khan backed by money from countries such as the United Arab Emirates, Qatar or Saudi Arabia.

“There is a chance that happens for a lump of change and it becomes the type of fight we don’t want to see, but at the same time we’ll have to see,” he said.

“What I don’t want is for Brook to have another operation, resurrect his face, insist he’s looking better than ever and then have to get a crack at a British guy on the undercard of a Anthony Joshua fight.

“The key here is how much money he’s retained throughout his career – I hope Brook has £15m in the bank and doesn’t have to fight again.”