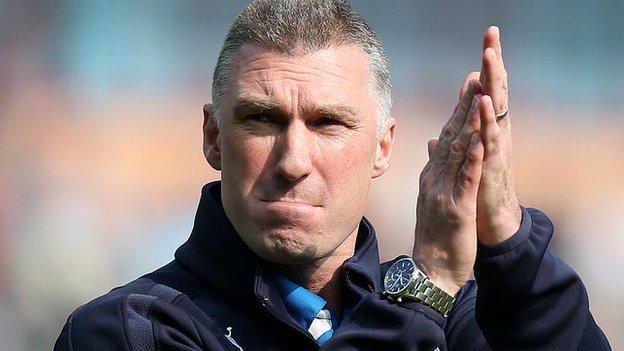 Bristol City has appointed Nigel Pearson as their new manager.

The ex-Leicester City and Watford boss, 57, has been without a club since parting company with the Hornets two games before the end of last season.

He has been chosen to succeed the sacked Dean Holden and take charge at Ashton Gate until the end of this term.

Pearson, who began his managerial career at Carlisle, has also had spells in charge of Southampton, Hull City and Derby.

The Robins lie 15th in the Championship, 10 points clear of danger, on the back of a run of seven straight defeats.

The first six of them led to Holden’s sacking on 17 February. but their losing streak continued on Saturday under caretaker boss Paul Simpson at home to Barnsley.

Pearson is set to watch Tuesday evening’s Championship match away at Middlesbrough before taking charge of Saturday’s trip to Swansea City.

Robins ‘chairman Jon Lansdown said: “Nigel gives us the leadership and direction we need to lift the players’ confidence and to turn our form around.

“The initial appointment is until the end of the season, when we will reassess the situation, hopefully with a view to the long term.

“However, the immediate priority for Nigel and the coaching team is to stop the current bad run and move us back up the table.”

Pearson twice led Leicester to promotion to reach the Premier League in 2014, and famously secured top-flight survival, despite being bottom at Christmas, after a run of seven wins and a draw one in their last 10 games.

He then left that summer, After which Claudio Ranieri led a team that had mostly been built by Pearson to the Premier League title in 2016.

Pearson then almost pulled off a similar escape job at Watford last season.

When he took over in December 2019, the Hornets were seven points adrift at the bottom but a run of four wins actually put them in prime position to avoid the drop even before becoming the first side to inflict a league defeat on champions Liverpool – a 3 -0 win at Vicarage Road.

But Pearson was surprisingly sacked two games before the end of the campaign, following a 3–1 defeat at West Ham, despite having won two of their previous three games.

Pearson also presided over a famous escape in his first job in management at Carlisle, who stayed in the Football League on the final day thanks to a famous injury-time winner from goalkeeper Jimmy Glass.