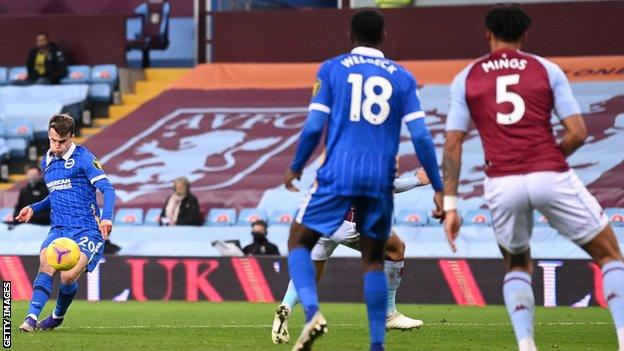 Brighton won at Villa Park for the first time in their history, deservedly edging out Aston Villa in a dramatic and entertaining encounter.

All of that preceded a frantic period of stoppage time that saw Tariq Lamptey sent off for a second yellow card and a decision to award Villa a penalty for a foul by March overturned after referee Michael Oliver consulted the pitchside monitor.

The defeat is Villa’s third in succession at home in the league and also comes at the cost of a hamstring injury to Ross Barkley, who pulled up inside the first two minutes.

They stay sixth, but at risk of slipping down the table with the majority of the weekend’s fixtures still to be played.

Brighton’s first victory in two months does not improve their position of 16th, but they at least move six points clear of the relegation zone.

This was made so enjoyable by a relentless back and forth, a consequence of contrasting styles. Whereas Villa pressed high, Brighton sat back, looking to break with pace and exploit an occasional shaky home defense.

Bertrand Traore, Barkley’s replacement, and Jack Grealish pulled the strings for Villa, the latter routinely surrounded by a swarm of blue shirts.

Welbeck’s pace made Brighton’s first goal, yet he was outshone by the electric Lamptey, who was a constant nuisance down the the Seagulls’ right.

In the end, Brighton were simply more clinical, with Villa’s threat diminishing after they went behind for the second time.

Brighton had managed only three goals in their previous four league matches, but despite often having to gather men behind the ball, they kept their attacking threat through Welbeck and his strike partner Neal Maupay.

Welbeck’s first goal for the club and fifth in as many games against Villa came against the run of play. With the Villa defense caught too high up the field, Welbeck latched on to Adam Lallana’s poke and ran unchallenged from inside his own half before cleverly lifting the ball over Emiliano Martinez.

Although Brighton lost the creativity of Lallana to a groin injury at half-time and found himself pegged back soon after, they did not shrink.

And, nine minutes after the Villa equaliser, Pascal Gross rolled the ball across the face of the 18-yard box for March to add the delicious finish.

Villa can point to the misfortune of the Barkley injury and the overturning of the penalty decision, but they are also engineered their own downfall through a number of missed chances.

Trezeguet and Ollie Watkins were the biggest culprits, with both guilty of wastefulness in the first half. The Brighton defense also proved resolute, with Ben White’s timely interception denying Watkins inside the six-yard box and Mat Ryan making a number of saves, including an unorthodox volley from a Tyrone Mings header.

Villa’s incision deserted them after Brighton’s second goal, yet they still seemed to have won a golden opportunity to snatch a point.

Oliver pointed to the spot when March caught Trezeguet but, despite the contact on the man being clear, March also got some of the ball, and that was enough to convince Oliver to change his mind, leaving Villa bewildered.

Brighton host champions Liverpool next Saturday (12:30 GMT), while Villa must wait until Monday, 30 November before travelling to West Ham (20:00).

Rate players out of 10 throughout or after the game. The rater will close 30 minutes after the final whistle.

Rating range key1 = Give it up10 = Pure perfection

Spurs a pony in a horse race – Mourinho

Jimenez in hospital after head clash

Warner Out For Third ODI, Entire T20 Series Against India

Labuschagne Ready To Open For Australia After Warner Injury

November 30, 2020
We use cookies to ensure that we give you the best experience on our website. If you continue to use this site we will assume that you are happy with it.Ok