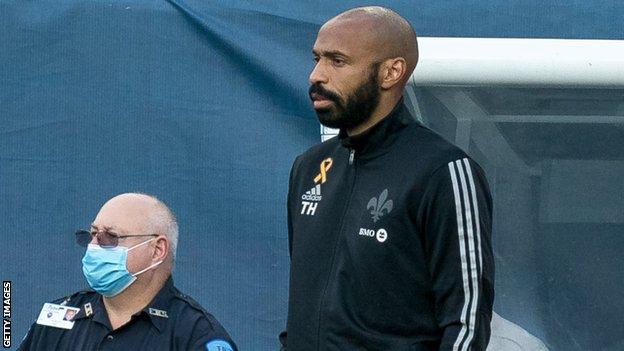 Former Arsenal, Barcelona and France striker Thierry Henry is on the shortlist to become the new manager of Championship club Bournemouth.

The 43-year-old ex-Monaco boss is currently in charge of Major League Soccer side CF Montreal.

The Cherries are keen to talk to Henry, but would require permission from the Canadian club.

Jonathan Woodgate was appointed as caretaker boss of Bournemouth after the sacking of Jason Tindall on 3 February.

BBC Radio Solent reports that former Huddersfield Town and Schalke boss David Wagner is also on the final shortlist to replace Tindall at the Vitality Stadium.

Wagner was sacked by German Bundesliga side Schalke in September The following an 18-match winless run.

Henry joined Montreal in November 2019, having spent just three months in charge of French Ligue 1 side Monaco during the 2018-19 campaign.

It was his first managerial role following a stint as assistant to Belgium boss Roberto Martinez.

Henry had been on the shortlist for the Aston Villa manager’s job in October 2018 before joining Monaco, where he started his playing career.

The Cherries, who parted company with long-serving boss Eddie Howe Following their relegation from the Premier League last summer, are sixth in the Championship.

Former Middlesbrough manager Woodgate is unbeaten in his first two league matches in charge of the Dorset side, who host Rotherham United on Wednesday (20:15 GMT).