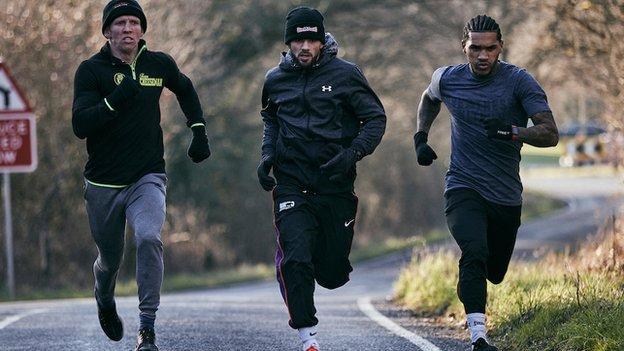 “Born with a silver spoon in my mouth? I’ll turn it gold.”

British welterweight Conor Benn is drawing inspiration from those adamant he will never achieve real success as he follows in the footsteps of his fighting father.

The 24-year-old, the son of former two-weight world champion Nigel Benn, is now five years into a professional career in which he is yet to lose and where the chance of his own world-title shot will edge a little closer if he overcomes Colombia’s Samuel Vargas in London on Saturday.

“I’ve learned how hard this sport actually is,” Benn told BBC Radio 5 Live, which will broadcast his fight live on Saturday night.

“It’s not for the faint hearted. It’s hard mentally, spiritually and emotionally. How does anyone know how it feels to walk out to an arena to meet a man who wants to take your head off? This ain’t for the sane.”

“I bet if I told any man in this room that another man would meet you and he wants to take your head off, would you feel comfortable?”

“And you’ve trained for eight weeks for this one moment. You can’t have a bad night at the office. You get criticized. People say ‘he’s found his level, he’s rubbish, he’s done’.”

“This is brutal. Once you come to terms with what it’s like it makes the sport easier, but then it does change you as a man.”

Benn recently became a father to son Eli, who he is hoping avoids a journey into boxing.

Earlier this week, British middleweight Chris Eubank Jr stated the “pros definitely don’t outweigh the cons” when discussing what is has been like to follow his own fighting father – Chris Eubank – into the ring.

Benn has said expectations and subsequent criticisms can “drain your love for the sport” but 17 fights and 17 wins into his journey, he is adamant a comfortable upbringing has had no impact on his desire.

“I think you’re born with that, the desire, the ambition, the will,” he adds. “I don’t have to fight. But when you’re young, ambitious and motivated nothing will stop you from chasing your dreams.”

“Born with a silver spoon in my mouth? I’ll turn it gold. The hunger doesn’t come from materialistic desires, I was born into that. It’s more the will to win, to be great, and the greatness comes from within .

“My dad inspired me to be a better man. Now with me being a dad, if I’m half the man my dad was I’ll be a happy man.”

Benn came close to a humbling defeat 11 fights into his career when he was floored twice on his way to a points win over Frenchman Cedrick Peynaud.

He admits he looked past the fight, seeing it as a “nice little payday” before going on holiday to Miami the next day.

This weekend’s opponent, Vargas, 31, has six defeats in 39 outings but has faced stellar names and insists experience will help him break Benn down and “take his soul”.

“He’s lost when he’s had to step up. Have I? No, I’ve risen to the occasion, every time,” Benn added.

“To be on where I plan on being, world champion, I should win this fight, without question, no problem.”

“This is another step up and why there’s a thrill to my career for the public to see me go from a raw novice to a genuine contender.”

Benn is likely to be a handful of fights away from a world-title tilt but since his tough night against Peynaud he has unquestionably matured in his approach and performance level.

Names including Britons Kell Brook and Amir Khan are being mentioned in his future by a sporting public growing more interested in how far he can go.

“That’s fine,” he adds with caution in his voice.

“The public can do that, I can’t. Experience has taught me you can’t ignore anyone.”