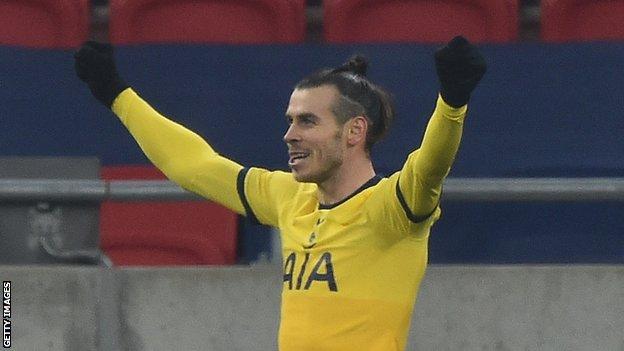 Tottenham manager Jose Mourinho said they had “one foot in the next round” after Gareth Bale inspired them to victory over Wolfsberger in the Europa League last 32 first leg.

Bale crossed for Son Heung-min to head the opener and then cut inside and blasted home their second goal. That was the first time since April 2013 that he scored and assisted a Tottenham goal in the same game.

“I don’t consider this an incredible victory, just a good victory that brings good feelings,” said Mourinho. “The plane back will be a different plane than after a defeat.”

Spurs boss Jose Mourinho spoke beforehand about how much he wants to win the Europa League and named a strong team, although Harry Kane was left in London for fitness reasons.

They were excellent in the first half but were much less impressive after replacing Son with Vinicius at half-time.

Wolfsberger were limited opposition, sitting sixth in the Austrian league and in a European knockout game for the first time. The game had to be played six hours away in Budapest, Hungary because of Covid restrictions.

The second leg is next Wednesday at the Tottenham Hotspur Stadium.

Bale and Dele Alli were the notable starters in the line-up for Spurs. Mourinho said beforehand he was worried about the result and not individual performances of fringe players – but he would have been happy with what he saw in the first half.

Bale set up the opener when he received Matt Doherty’s pass before crossing for Son, who matched his personal goal tally of last season with 18.

That was Bale’s first assist for Spurs since April 2013 against Manchester City – before he left for Real Madrid.

Doherty picked out Bale again, but this time the Welshman cut on to his left foot and smashed a powerful effort past the goalkeeper, his fifth goal of a loan spell from Real.

When Moura beat several defenders on a mazy run to score Spurs’ third, it looked as if it could be a rout.

Alli looked in the mood too, with a brilliant nutmeg to create a shooting opportunity although he fired straight at the keeper.

But they looked much less fluent in the second half, with Bale and Alli more peripheral before being replaced.

Mourinho said Bale could feature against West Ham in the Premier League on Sunday.

“One of the reasons why he left the pitch by minute 65 was to try to have him available for the next match,” he said.

“By taking him off at that minute we managed to save him a few miles in his legs and probably, I know the match is Sunday at 12pm, but I believe he has a chance to play the match.”

Moussa Sissoko sloppily conceded a penalty which Liendl scored and the hosts looked more assured. Had Wernitznig’s powerful drive off the crossbar gone over the line instead of bouncing on it, it could have been a different tie.

But Vinicius most likely booked Spurs’ place in the next round when he stabbed home Erik Lamela’s flicked header late on.

Mourinho revealed Kane did not want to risk playing, having recently returned from an ankle problem. He had been due to travel to Hungary.

“He’s an experienced guy that had injuries in the past, he knows his body better than anyone,” Mourinho said.

“He knows that I want him to play every minute of every game, so it’s never a question of a choice.

“I wanted to come here with the best team and the players that could give us more opportunities to win the game and get a good result, but he made the decision based on his feelings.

“Of course myself and the medical department, we agreed with him in giving him this opportunity to take care of his condition, but I believe on Sunday he will be OK and ready.”